The Kinnettles Mansion is available for exclusive use only, an excellent choice for golfers looking for something something spectacular

The Kinnettles Mansion hosts eight large bedrooms / suites, each of which has its  individual character and decor from the original interiors when the property was first built albeit tastefully restored over the years.

The Mansion house was the family home of Lord Haig of the Whisky family. During the First World War, Lord Haig commanded the British Force on the Western Front and was commander during the Battle of the Somme.

An avid golf enthusiast, Lord Douglas Haig was captain of the Royal and Ancient Golf Club, St. Andrews, from 1920 to 1921.  He was also Lord Rector and later Chancellor of the University of St Andrews, Scotlands oldest University

The original Victorian stone walled gardens lie to the west of the house and are equally beautiful in the Autumn as in the spring.

With a vast array of plants, flowers and trees, some indigenous to the area and some thought to have been brough back by Lord Haig, including the stunning in bloom Japanese rose blossom trees.  At the south end of the gardens sits the vast greenhouses with a wonderfully modernised summer house.

One of Kinnettle Mansions more recent owners being an avid film buff decided to renovate one of the old storage rooms into a private cinema. Where better to enjoy a bit of James Bond or watch your favourite sporting event.

With 11 comfy traditional cinema seats in royal blue velvet, all you need is a regular top up of something cold in a glass or a large box of popcorn. 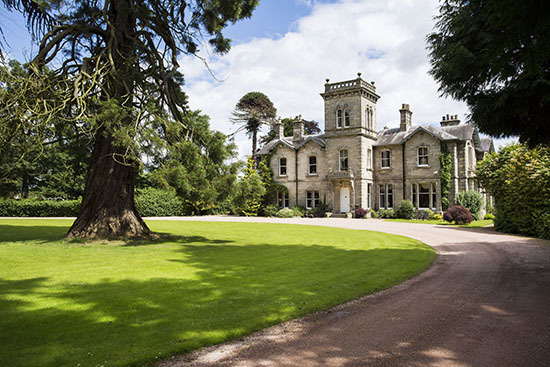