The Course is rated one of the most delicate golf courses all over the world, named ‘the Hotchkin’ after the family owned and developed the course for decades. For over a century, the course has welcomed many golf travelers from all over the world. It is famous for its genuine natural beauty, its unique tactical requirements and distinctive bunkering.  All of the 18 holes of the course provide an unforgettable experience.

Signature Hole: Many important matches have been decided at the final hole of the course which is also the most famous hole. This is a 540 yards par five finishing hole challenging the player until the very end of the match. The tee shot for this hole is considered to be most critical.  The fairway is widening continuously, therefore the further the shot is, the wider the fairway becomes. Moreover, bunkers are to be found on both sides which require more planning for the shot.

History: Originally, in 1890 a nine hole course was opened for play at Woodhall Spa. Soon after, in 1891 the Golf Club was established and started to develop , the town started to attract people not only because of its spa resources but golf has also become a centre of interest. In 1902 the course had to move as the land was acquired for community purposes. At this stage Stafford Vere Hotchkin offered a land where the 18 hole course was finally built (and which is the current location of the course till nowadays). The designer, Harry Vardon visited the course in 1903, when he actually set a record of 35 in the process. The course construction lasted for years and included several changes and development until 1914, when the first exhibition match was played. A couple of years later Stafford Vere Hotchkin took over the finances. In the 1920’s he managed to create a massive interest in the golf course.  After his death, 1953 his son Neil, carried on his father’s tradition. He was a great supporter of amateur golf. In 1995, in order to protect the future of the Golf Club, Neil Hotchkin sold the course to the English Golf Union. 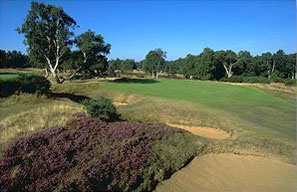